Bottled water is not regulated. Therefore, it may or may not contain PFOS, PFOA, and other undesirable chemicals.

While home filtration systems may help, either for drinking water alone or whole house systems, they are not perfect. There are many variables to be considered. The correct brand and type equipment must be purchased and properly installed and maintained. The NSF International, a global public health and safety organization, certifies water filtration systems . They provide a webpage to search for companies that provide systems certified to reduce PFOS and PFOA at info.nsf.org/Certified/DWTU .  At this time, Aquasana and Culligan are two companies on the NSF list. The advice of a disinterested competent knowledgeable professional (not a sales person) is highly recommended. Remember that the recommended levels for these chemicals in drinking water are for a lifetime of consumption. Furthermore, although these individual systems can be effective, the best place to remove these chemicals is at their source where economies of scale provide better performance at a lower aggregate cost.

The U.S House of Representatives has established a  PFAS Task Force co-chaired by Congressman Brian Fitzpatrick of Middletown, PA. Representatives Madeleine Dean and Brendon Boyle make up the 20  member bipartisan group representing 7 states. One of the goals is to establish the creation of a formal drinking water standard and adding the chemicals to official hazardous substances lists, including for Superfund sites.

Some states have enacted legislation setting permitted concentrations that are much lower than the EPA advisory level.  New Jersey has set its legal limit at 14 ppt for PFOA and an Advisory Level of 13 ppt for PFOS. Others are considering legislation. Pennsylvania has no law regulating allowable concentrations of these chemicals in the drinking water. Local PA legislators in the House and Senate have sponsored and strongly advocated for bills that would mandate levels no higher than 5 ppt (non-detectible), but  the PA legislatures have failed to act on it.  In September, 2018 Governor Wolf issued an Executive Order establishing a PFAS Action Team to address this issue across the state.

Cheltenham Township Commissioners recently sent a letter to Aqua PA requesting they Cheltenham residents’ water payments be held in escrow until levels of PFOS and PFOA are non-detectable in the drinking water. (Residents must still pay their water bills.)  They also issued one resolution supporting PA legislation and another resolution urging the federal government to clean up the contamination at the local military bases, the source of the problem.  The Township has provided a Public Water page at  https://www.cheltenhamtownship.org/pview.aspx?id=40792.

PFOS and PFOA contamination, as measured by Aqua PA over the last 2.5 years, has been highly variable. The 5 parts-per-trillion threshold (solid blue line on graph)  that was proposed in the PA  legislature would help ensure that these industrial contaminants are monitored consistently and eliminated from our municipal water supply to the extent possible with reasonable purification methods applied at the source by the public utility, Aqua PA.

​ AQUA PA, monitors its water sources contaminated with PFOS and PFOA and publishes the levels at http://www.waterfacts.com/monitoring.  This chart below indicates trends for the last 2.5 years.

PFOS and PFOA are part of a large family of potentially harmful man made chemical compounds known collectively as PFAS that came into common use in the 1950s and '60s and were considered useful because their resistance to heat, water, and oil. They were used in hundreds of industrial processes and consumer products such as non-stick cookware, certain food containers, certain fabrics and rugs, certain cleaning and personal care products, and other materials. The EPA began limiting their use in 2002. They are extremely resistant to dissipating in the environment.

Read More On the Issue

What You Should Do Right Now

PFOS and PFOA  has been detected in Cheltenham’s drinking water since 2016 and in other local municipalities as early as 2014.  It is a national problem. The source of our contamination is the Willow Grove Air Station and other nearby military facilities who used firefighting foam that contains the chemicals.  The chemicals continually find their way into surface and underground water. These bases have been Superfund sites for decades.

Aqua PA The North Hills Well that served part of Cheltenham was closed this past summerwhen combined levels of PFOS and PFOA rose above 40 ppt. The Neshaminy Treatment Plant is next for evaluation on reducing levels in the water that is treated at the site. 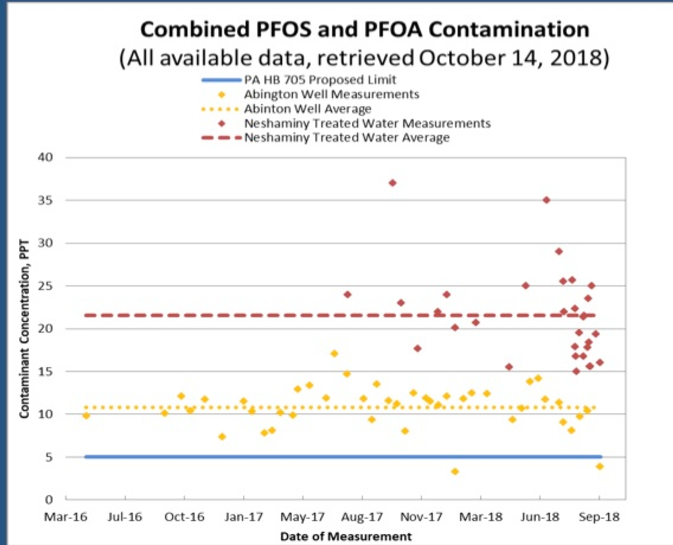 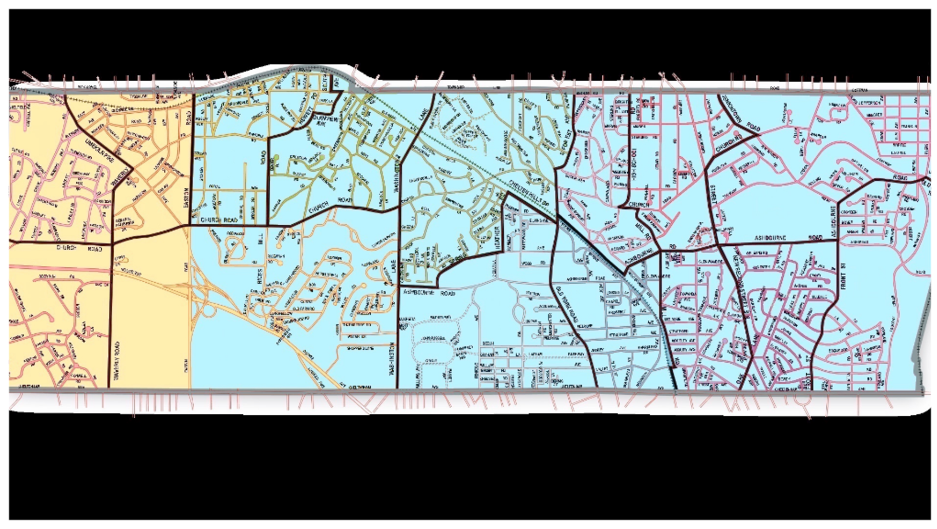 Aqua PA supplies Cheltenham's water from two sources. The majority of the Township receives its water from the Neshaminy Treatment Plant. Those living west of Easton Road currently receive their water from the Abington Well.

Read More On the Issue

What You Should Do Right Now

​[PFOS and PFOA  accumulate in our bodies and take years to dissipate. Studies in humans have suggested that they are harmful with long-term exposure. The  current EPA health advisory for drinking water levels is 70 parts per trillion (ppt) however, some recent research suggests that the level should be lower by a factor of ten. A level of 5 ppt is considered non-detectable.