How to Eradicate Lesser Celandine

Lesser Celandine will eventually invade your garden beds and destroy any hope that other plant choices will survive. There are non-food-grade vinegars with concentrations of 20%, 30%, or 45% that will eradicate this weed. They come with applicators that allow you to spray directly onto the plant and avoid harming nearby plants. Spray at least once a year until this invasive weed no longer appears in your garden. Do it NOW before it spreads any farther.

BE SURE TO READ AND FOLLOW THE DIRECTIONS FOR THE VINEGAR-BASED WEED KILLER CAREFULLY.  PROTECTIVE CLOTHING AND OTHER PRECAUTIONS WILL BE NECESSARY.

1.  It blooms early. Why is this a problem? Because it competes with the native plants that bloom early and which provide food for native insects and other organisms. But Lesser Celandine was imported from Europe, Africa, Asia, and Siberia so our native pollinators are not interested in it. It’s not a food source and doesn’t add anything positive to our ecosystems.

2.  It is not fussy about where it grows. It can grow in all kinds of light, moisture, and soil conditions.

3.  It’s an aggressive plant and outcompetes our native plants.

4.  It forms a thick mat, which pushes out the native plants, then turns to mush and disappears by mid June. The bare ground it leaves behind can then be colonized by other weeds.

5.  It can reproduce in almost every way possible, which makes it spread easily and hard to control. It grows from tubers (they look like bulbs), from bulbils (football-shaped parts growing in the leaf axils), from seeds, and through wind pollination. If roots are left in the ground if digging it up, the roots can produce a new plant.

6.  It has no natural predators to keep its numbers in check, so it’s spreading like wildfire.

8. In every state in which it grows (PA, NY, CT, DE, MD, NJ, OR, WI, WVA, DC), it is considered an invasive pest plant and its eradication is actively pursued. 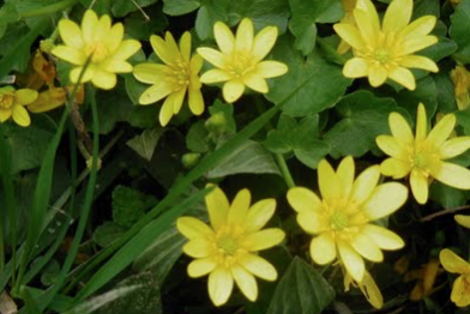 It may look pretty.  It may brighten the garden early in the season after a long,

nearly colorless winter, but it is an

Why  is Lesser Celandine a problem?